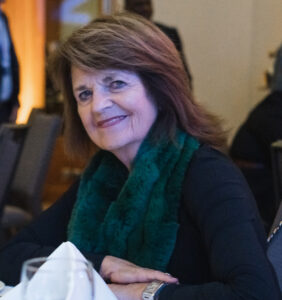 We are very pleased to announce that the Supervisory Board of Child Helpline International has appointed Corinne Dettmeijer as our new Board Chair.

Corinne took up her new position during the 10th International Consultation of Child Helplines, which took place in Stockholm, Sweden, at the end of September 2022. Corinne, who has been our Vice-Chair for the past four years, takes over from Professor Jaap E Doek, who is stepping down after completing his second term of office on the Board.

The formal announcement was made by Child Helpline International’s founder, Jeroo Billimoria, during the official welcoming dinner at the International Consultation. Jeroo welcomed Corinne to her new role and also thanked our outgoing Chair Jaap Doek for his vision, dedication and eight years of service. Corinne’s appointment as Board Chair will be effective for a term of 3 years, providing invaluable continuity to our Supervisory Board and the strategic direction of our network.

Following a successful career in the judiciary, Corinne became Dutch National Rapporteur on Trafficking in Human Beings in 2006, with her mandate expanding in 2009 to include child pornography and the whole spectrum of sexual violence against children. It was around this time that Corinne first became involved with Child Helpline International, as the data we had collected from our child helpline members became an important resource for Corinne’s work. She has produced close to 35 reports on trafficking and sexual violence against children, through which she has always stressed the vulnerability of women and children. Special areas of focus have included child labour, underage victims of domestic trafficking, victims of sexual exploitation, child marriages, migrant children and Roma children.

She has been honoured with the Dutch Royal Order of Chivalry, the Order of Oranje-Nassau, and is nationally and internationally acknowledged for her unwavering commitment and dedication to exposing the nature and extent of human trafficking. For three consecutive years she has been listed as one of the ten most influential women in the Netherlands in the field of justice and public administration. Tribute has been paid to her motivational leadership in the international fight against the trafficking of human beings and sexual violence against children by Nobel Prize winner Kailash Satyarthi, by actress and humanitarian activist Emma Thompson, and by Marta Santos Pais, the former Special Representative of the UN Secretary General for Violence Against Children.

We are proud and honoured to have Corinne serving on our Supervisory Board, and we hope you will join us in wishing her every success in her important new role as Board Chair.